“Travel, it leaves you speechless, then turns you into a storyteller”-Ibn Battuta 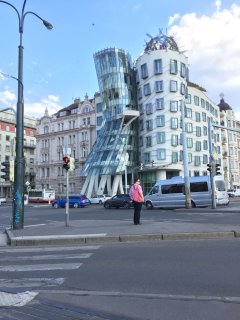 25th May 2018,1 am: Children crying, normal chaos, usual formality and final announcement. My Boeing A -320 finally took off from Mumbai airport. It was exciting as well as scary. In the land of unknowns is always an adventure. My summer adventure in central and eastern Europe had just taken off. The audience of this generation has an unbelievably low attention span, So I chose to tell my stories in episodes. Here is the opening one.

The road to Prague was marred by an incident in Brussels(Layover at Brussels wasn’t a great experience). My newly bought perfume and sunscreen snatched away by a polite-looking lady. Looks can deceive. My repeated attempts to explain to her that sunscreen is not a liquid was a failure. Thankfully, I reached Prague airport with rest of my cosmetics and sanity intact. I tried to make contact with my friend from Chandigarh. Unfortunately, neither wifi nor sim nor language was working. Welcome to Prague. After waiting for an hour, he magically appeared. During that one hour, I bought myself another sim from the counter, lost few cents at local telephone booth(because I didn’t understand the Czech language) and was wandering like a maniac. It wasn’t a perfect start to the trip.

Everything changed when I and this simple looking guy from Chandigarh, stepped outside the airport. Soothing air, clean roads, and a picturesque background were enough to recharge our batteries. Wait, did I tell you about this simple looking guy. He was simple and interested in taking photos. You will understand him better as I move ahead in my journey(or maybe not). We took the bus to reach the metro station. Buses in Europe feel so luxurious and comfortable especially when you see the state of buses in India. Traveling by public transport in Prague is an experience in itself.

We reached our hostel in around 40 minutes, soaking in the countryside view of Prague. It was indeed beautiful(worth every hype they create about this city). Trams on the road with ancient looking buildings in the background gives this city a contemporary feel. You can walk around the city for hours and still want to walk more, such is its beauty. After a delightful walk(you don’t say that often), we finally reached our hostel. At the reception, we met an unassuming young man hiding behind shades. Let’s call him beer boy. (It ain’t that difficult to understand why, but you will know him or beer better as I travel).He helped us with check-in formalities. Our hostel was indeed clean and safe. It was called safe stay.

At the hostel, I met another interesting character. When you meet someone for the first time, you wonder: Are they actually as boring as they look? Yet this girl looked interesting at the first glance. She introduced herself in not so flamboyant way. Yet, her tone was enough to understand her enthusiasm for this trip. Let’s call her Crazy girl because she indeed was. The final character I met was a girl with a quiet and eccentric demeanor about her. The more you talked to her, more layers opened up The best thing about travel is not places but amazing personalities you meet on the road. Trust me, more you travel, more crazy folks you meet.

Day 1:We decided to visit Charles bridge in the evening. Anyways, Sun never sets in Prague. There is no concept of time.10 am and 10 pm look exactly the same.I, crazy girl, the eccentric girl, beer boy and simple boy set out to explore the magical streets of Prague. Charles Bridge is a historic bridge that crosses the Vltava river in Prague, Czech Republic. Everything from the smell of pizza,texture of roads,locals walking in black ,incomprehensible language and strange looking building was so admirable. If you ever happen to come to Prague and don’t know what to do, just walk. Crazy girl was busy taking selfies and going Instagram live. Beer boy was just waiting for the perfect place to open up his beer. Eccentric girl was waiting for her boomerang moment. Simple boy was simply admiring the strange yet beautiful building. I was soaking in the place and of course observing idiosyncracies(That’s what I do).On our way, we saw a weird building called dancing building(hips don’t lie). It seems it was also enjoying this cool place. Every building was constructed on baroque architecture. Baroque statues,Baroque buildings and Baroque castle. This architecture is common in central and eastern Europe(You can definitely research more from google). The eccentric girl gave me this baroquic information. We casually strolled ahead. Beer boy opened his Pilsner(Local beer of Prague). You cant separate beer from Prague and Prague from beauty. In fact, there is a beer museum in Prague and the best thing is that it is actually not a museum, you can actually drink beer in that cool place. Folks riding beer bike was a wonderful sight. Drinking beer and working out isn’t a bad way to explore this city. Enough of beer talks. Admiring the incredible beauty on our way(mostly buildings), we reached the Charles bridge. It was magnificent,historic and something to cherish for a lifetime. View of the bridge with a majestic castle in background,was stunning. Gentle cool winds, clear skies, and a serene river. Talented locals playing melodious music on the streets is indeed refreshing. Some of them using instruments you haven’t ever seen in your life, yet it sounded good. You will feel like a local even if you stay here for a day. Before you own the city,the city owns you. That’s Prague for you folks.

Day 2: There is always a square in Europe wherever you go. Next morning, we all got ready to witness the charm of the old town square. Wow, when you reach the square, you get a touristy feeling. It`s a place where Chinese take selfies. Square was magnificent and grand. We couldn’t see the clock tower as it was under construction. You could see baroque churches(as explained by the eccentric girl), historic buildings and marvelous old structures. Our walk tour was conducted by a not so famous man named Jeremy from the U.S.A.I have never seen a man so enthusiastic about history ever(the guy was terrific). Gosh, history of the place from 13th century till now was narrated in such an engaging way. I was mesmerized by his sheer knowledge and love for his work. He narrated the story with an amazing sense of humor. From the Hussite church, defenestration(an act of throwing someone out of the window), General Ziska, Don Giovanni, Kafka, jews, communism, Frankenstein and second world war. Gosh, Jeremy was the star of the day. We were simply awed by his description of Czech history. My interest in history was reignited by this man`s sheer brilliance. 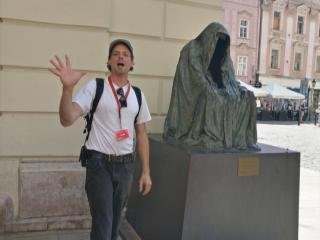 I don’t really remember when this incident took place(2nd or 3rd day), but it was crazy. Not surprisingly, it was the crazy girl who started this crazy expedition. She just read somewhere or simply hallucinated that there is a tower with crawling babies on it and it looks amazing. Thus began our search. On these magical streets of Prague, we are searching for crawling babies on the tower. Changing tram to tram, walking down silent eerie roads, we finally reached the tower but found no babies. I still don’t know to this date, what her obsession with crawling babies was about. It was simply crazy. Although, we did find some babies crawling on the ground. Her dream was partially fulfilled. It was a crazy search we will never forget. 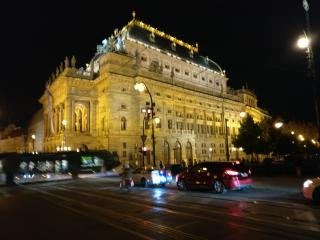 Prague: Even more beautiful at Night

Day 3: On our last day in Prague, we set out to see the majestic Prague castle. The simple boy was only concerned about taking photos and eating Indian food. Crazy girl was just waiting to go Instagram live again. Beer boy, well, was giving more advice on local beers of this city. Staropramen was his favorite(as per my weak memory). Anyways, the eccentric girl was just building up another story to tell me about Prague history. It was a clear beautiful day in Prague(it always is). The route to the castle first led us to Petrin tower. A 64 m high observation tower built in 1891. In 1889, members of the Club of Czech Tourists visited the world exposition in Paris and were inspired by the Eiffel Tower. They collected a sufficient amount of money and in March 1891 the building of the tower started for the General Land Centennial Exhibition. It was finished in only four months(Source: Wikipedia, that’s the only history I could research and I ain’t no Bill Bryson). The view from the top of Petrin tower was simply mesmerizing. Prague with its castle at the center, lush green countryside, Charles bridge and adjoining unique buildings with baroque architecture, was a sight to relish. It was worth every Krones(local currency of Czech Republic).

Our next stop was grand old Prague castle. It is the largest ancient castle in the world. The castle buildings represent virtually every architectural style of the last millennium. Prague Castle includes Gothic St Vitus Cathedral, Romanesque Basilica of St. George, a monastery, and several palaces, gardens and defense towers(Source: Wikipedia, for more details: Read and research). We reached the castle at around 2 in the afternoon. It was hot but I wasn`t sweating(air is hardly humid and there is always a gentle breeze).

My travel buddies weren’t much interested in history. We only explored massive  Cathedral(it was beautiful). I was taken by the sheer brilliance of glassworks on the windows, unimaginably intricate designs on the walls and grand timeless pillars. It was a feast for the eyes. If you are planning to visit Prague, you must not miss this castle. It is a fantastic piece of artwork and history combined. You feel you are in more than one era at a time(Ancient and contemporary). It is indeed surreal.

I can tell you million more things about Prague and a lot more about my travel partners, but this blog will never end. I can never forget all the idiosyncrasies and interesting conversations, all the crazy stories told by a rather insane girl, all the innocence portrayed by a simple boy and of course white wine and Seinfeld combination of beer boy. It was an unforgettable experience that will remain in my heart forever.

Hey folks,I hope you enjoyed my journey to this amazing place called Prague.Until the next episode: Goodbye or Ahoj(as they say it in Czech).Check it out, it is indeed worth every krone.